The two met in the late '70s at a high-end audio store Sanders managed in Lawrence, Kansas. Despite very different backgrounds—Sanders had trained in architecture and advertising, Sutherland in electrical engineering—they shared a passion for music and, they soon discovered, electrostatic loudspeakers.

For anyone seeking the ultimate in sonic purity and clarity, electrostatics held enormous appeal. Unfortunately, designing and building one that will also produce the sound levels and bass extension most people expect from a loudspeaker is a formidable challenge, even today. Back then, only a relative handful of electrostatic speakers had ever been brought to market. Although most were failures, a few, such as the KLH Model 9 and Quad ESL, were legendary among audio enthusiasts.

The KLH probably came closer than any other full-range electrostatic speaker of its day to competing effectively with conventional speakers in bass and output capability. It was very big, however, and finicky and expensive, and it didn't fit in at all with the rest of KLH's line. Consequently, sales were modest, and eventually the Model 9 went out of production. The Quad ESL was much more successful, especially in its native England, and until MartinLogan's products came on the scene it was arguably the only commercially significant electrostatic loudspeaker in history. It suffered the classic limitations of the breed, however. Though the original Quad electrostatic was widely regarded as the world's finest reproducer of chamber music, fans of rock and even symphonic music were inclined to look elsewhere.

In late 2005, MartinLogan was acquired by a subsidiary of Shoreview Industries, a small financial firm specializing in supporting well-run private companies. Shoreview recognized MartinLogan’s bedrock commitment to quality, high performance, and customer service. They have remained a passive investor, providing an ongoing source of capital funding for research and facility upgrades over the years. With this backing as rocket fuel, MartinLogan was poised to become an international powerhouse of audio technology.

By the late 2000s, MartinLogan was not only producing the world’s most recognized electrostatic loudspeakers, like the affordable Vista (2006), the fully powered Purity (2007), and the reference-level Ethos (2010), but also making strides in the use of alternative thin film transducer materials. 2010 saw the introduction of the Motion Series, featuring exciting new Folded Motion tweeter technology, which miniaturized a high resolution thin film transducer into a compact tweeter design. Folded Motion tweeter technology delivered electrostatic-like high frequency detail in a more traditional speaker design.

MartinLogan was also innovating more specialized home theater loudspeakers. The Stage, a compact center channel speaker, introduced in 2006, led to a long line of multi-application, ESL-based home theater speakers. These were bold, beautifully designed high performance loudspeakers that could be used in any position in a surround-sound system. (Subsequent Stage designs featured the Folded Motion tweeter.) The Motion Vision Soundbar, introduced in 2012, used Folded Motion tweeter technology to explode preconceived notions about multi-channel soundbar performance. It was the only powered all-in-one home theater loudspeaker to deliver a MartinLogan level of realism and impact.

These multi-application branches of the MartinLogan product tree widened the appeal of MartinLogan’s reference standard of audio reproduction. But MartinLogan never lost sight of its core audio imperative: crafting the world’s best, most advanced electrostatic loudspeakers. Behind the scenes, MartinLogan engineers and designers were working up to something big and bold.

In fact, the biggest and boldest MartinLogan loudspeaker system since the Statement e2: the Neolith. Over six feet tall and nearly 3 feet wide, with an electrostatic radiating surface of over 7 square feet, blended with gargantuan woofers capable of handling 1300 Watts of power, the colossal Neolith delivered a totally unconstrained, full spectrum “live” performance. It became the new embodiment of MartinLogan’s passion for Truth in Sound; the loudspeaker experience by which all others, both electrostatic and traditional, are measured.

Quick on its heels in 2016, MartinLogan introduced the Masterpiece Series. The flagship model of the Masterpiece Series, Renaissance ESL 15A, is considered the pinnacle of electrostatic achievement. This new line carries within it the whole history of MartinLogan ESL innovations, advancements and breakthroughs, from massive integrated woofers and towering, perfectly blended electrostatic transducers, to handcrafted crossovers and Anthem Room Correction (ARC™) technology, the world’s best instant performance optimizer.

Today, MartinLogan continues in the tradition of its innovative founders, with hands-on design and engineering, and proprietary manufacturing techniques. Constant improvements on the vanguard of electrostatic and thin film transducer technology keep MartinLogan on the cutting edge of audio innovation. Because of this heritage, MartinLogan continues to be the loudspeaker of choice for people who demand the most realistically rendered audio. Dedication to recreating sound in its truest form, using the most astonishing audio technology available, remains the personal passion of everyone in the MartinLogan family. Now, and forever.

Join us, and experience Truth in Sound. Find a MartinLogan dealer near you HERE. See how MartinLogan loudspeakers are made HERE. 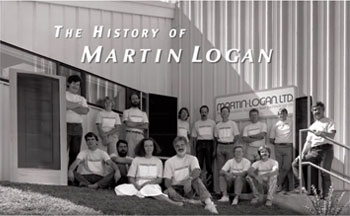 Watch The History of MartinLogan

One of the first electrostatic speakers was built in the 1920's. It was created from a pig intestine coated in gold leaf and stretched as large as a door. From the moment the speaker began playing its realism stunned the listeners. However, the speaker promptly disintegrated.

It wasn't until the late 1960's and 1970's that materials began to emerge that would allow an electrostatic speaker design that was not only extremely safe and reliable, but also easy to drive with a conventional amplifier.